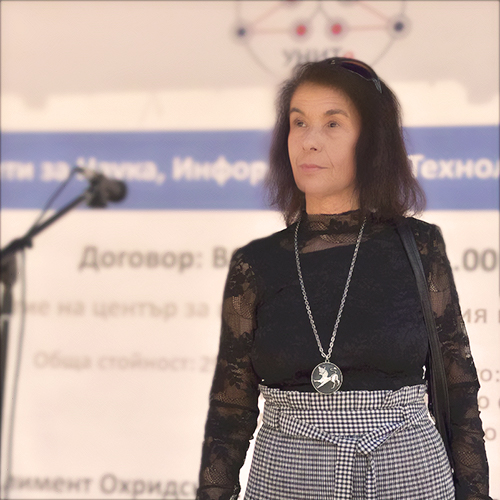 , Dr habil in Physics and Mathematics, PhD in Nuclear Physics, is a research professor at the Faculty of Mathematics and Informatics (FMI) at Sofia University. She is also Director of Research at the Center for Excellence in ICT - UNITE and heads the Laboratory of High Performance Computing (HPC), in Sofia Tech Park.
For her scientific achievements in theoretical physics, she was awarded the JSPS (Japan) fellowship, Fulbright senior scholar (US), and FP3 Mobility Grant to the Catholic University in Louvain la Neuve (Belgium). She has been a member of the Scientific Committee on health, environmental and emerging risks (SCHEER) since 2016, and a vice-chair of the Science Committee on Emerging and Newly Identified Health Risks (2009-2016) at the European Commission.
Dr Proykova has been the national delegate to the European Strategy Forum on Research Infrastructures since 2007, the Chair of Strategic Working group DIGIT since 2017. A member of the Equal Opportunity Committee, European Physical society since 2012, she has been its Chair in the period 2008-2012.
Between 2015 and 2019, she was the President of the Bulgarian Association of University Women. She is a co-founder and a member of the board of the Bulgarian Center for Women in Technology (since 2012).

Paul Ginsparg recognized the need for central storage of scientific papers and in August 1991 he created a central repository mailbox stored at the Los Alamos National Laboratory (LANL) accessible from any computer. Additional modes of access were soon added: FTP in 1991, Gopher in 1992, and the World Wide Web in 1993. LANL archive began as a physics archive and later expanded to include astronomy, mathematics, computer science, quantitative biology, statistics. In 2001 the archive was moved to Cornell University and named arXiv.org. In a sense the open-access nature of the arXiv pre-prints can be considered as a prerequisite of the Budapest Open Access Initiative in February 2002, the Bethesda Statement on Open Access Publishing in June 2003, and the Berlin Declaration on Open Access to Knowledge in the Sciences and Humanities in October 2003.

The “arXiv culture” stimulates the researcher’s ability to share a pre-print of an article before its publication in a journal. The arXiv deposition opens the peer-review process to the entire scientific community with no delay. A remarkable consequence of this peer review is the potential for experts publishing litigation-related work in what are called “predatory journals”.

The Open Access opens the road to the Open Science – a term/concept that describes the entire process of conducting and communicating science – sharing FAIR data, methods, codes, open practices to allow critical scrutiny, so that knowledge can be validated and used by the whole community. Open science (“open research”) includes not only open access to content and information but could comprise citizen science projects, scholarly communication networks, open source software and open lab notebooks.

How to combine the peer-review process typical for scientific journals and how to protect the intellectual property rights in the realm of openness are Open Questions to be discussed in the talk.